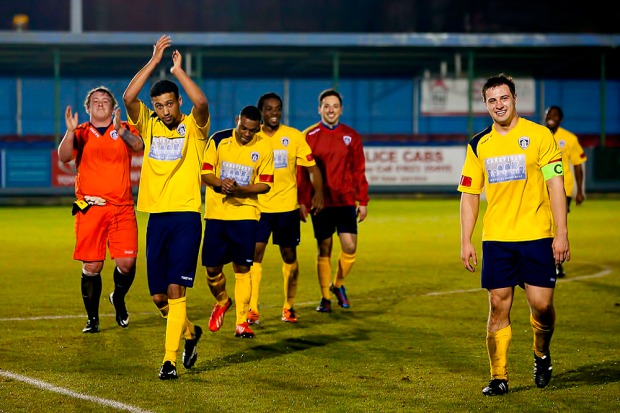 A long trip on Tuesday night from Guildford down to Taunton Town for a 1945hrs kick off. We left later than planned but fortunately no traffic problems and we were able to make up some time whilst on the road.

The Guildford City team looked like a good squad on paper, although as someone pointed out we don’t play on paper. I have to say that despite going one goal down, and then a second in the last minutes of the first half, city never dropped their heads.

In the second half they dug deep and really raised their game, running out 2 – 3 winners which made the minibus trip back to guildford a pleasant one, even if I didn’t hit the sack until 0100hrs.

What A Night. Guildford City were away to local rivals & fellow relegation battlers Fleet Town. My first visit to the ground, and I was stunned by the pitch lighting, 3200ISO, 1/160 @2.8 but only in the brightest parts of the pitch.

City needed to win, but it looked like it was going to be a long night after Fleet Town scored very early on. So one down with a couple of minutes played, until on seven minutes City’s LANCE BANTON-BROWN charged into the box, to be met by the Fleet Shot stopper feet first, with no intention of playing the ball. Decision was obvious, Penalty & Red Card, “early bath” for the Keeper. Looks like City are finally going to get some decisions going their way.

After nearly 4 minutes of arguing with the referee, the Fleet Keeper eventually leaves the field. So with their goal scorer “between the sticks”, step up City Captain BEN WALSHE, always calm over the ball whether a free kick or a penalty, three steps, “back of the net”. Parity restored.

On 13 minutes LANCE BANTON-BROWN has an effort on goal, but it is deflected and winds up at the feet of ANDY WHITE on the edge of the 18 box who smashes it in to the “back of the net”.

Anyway enough of the football cliches, City ran out victors in what was a physical match with the referee seeming only to happy to join in and brandish as many cards as he could, and generally enjoyed the high spirited nature of the game.

Jack Guilford (who plays for Guildford) netted a 3 for City, now it should have been a bit of a fun, training session football, but Fleet fought back with a goal from the penalty spot, after a hand ball in the penalty area. City should have been home & dry at the end of the first half, having missed a couple of chances & a couple of good saves from their stand-in keeper.

Important thing: City Won, no point in crying over spilt milk, Lance Banton-Brown went off injured after a real clattering from the Fleet Keeper & a defender, hopefully he will be fit for tomorrows home game against Mangotsfield, who City lost to 5-3 first game of the season, due to being asleep for the first 3 minutes & conceding two goals.

I am photographing a massive game tonight as Guildford City FC play against bottom team Fleet Town. City beat Fleet back at the Spectrum in September, tonight is the night to complete the double, and create a bit of breathing space between them & City.

After a good point against Shortwood on Saturday, hopefully a full strength squad (although missing Ben Rayner, through injury) and the same kind of effort tonight should see 3 points heading Guildford’s way (Christ I hope that I haven’t jinxed it saying that).

Hopefully the Sweeney will be mob handed tonight, and really get behind the team.
COYG!

Wednesday Night sees me at the Guildford Spectrum to cover the GCFC v Wimborne Town match that has been rearranged from a while back.

Wimborne have a two hour drive to play this game and rather selfishly I hope that they have the same travelling woes as we had when we played them at their ground. Hopefully The Sweeney will be in good voice on the night, COYG!!!!

This Saturday sees me once more heading west, down the M4 corridor to Paulton Rovers, right in the heart of Midsomer Murders Country. Three 9 Seater minibuses will be heading down the M4 if you see us give us a wave.

Paulton Rovers are quite a bit higher than City in the league, but haven’t had a great run of form recently, since the new year they actually have a worse record with more losses, so City should head into this game in good heart. 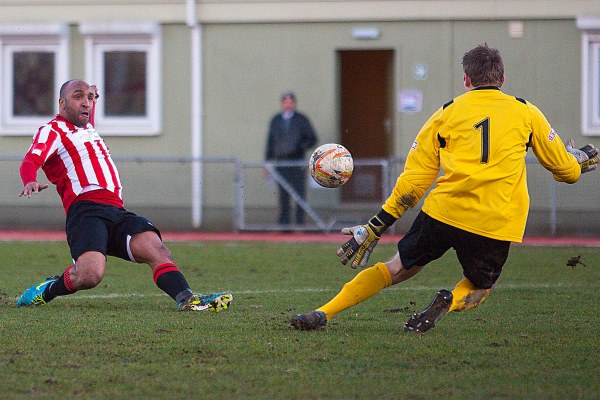 A cracking result, and a cracking team performance, Lance Banton-Brown (henceforth known as Super Sub) just can’t stop scoring against Bishop’s Cleeve, a brace at their ground in December & One today.

City’s survival hopes given a huge boost by a deserved victory against fellow strugglers today.