Assuming that the game doesn’t get called off, Guildford City will be heading west to play Taunton Town. City beat Taunton 3-2 at the Spectrum, hopefully they will be able to repeat the victory this weekend.

From the Derby match against Godalming Town FC, the back page of the Surrey Advertiser.

Awayday trip for Guildford City FC this weekend. Three 9 seater minibuses will be driving sedately from the Guildford City Football Club’s Home Ground at the Spectrum to play Taunton Town in Somerset.

I shall be a) Driving one of the buses, & b) photographing the match for the club and the local rags. The only concern that I might have is that the people of Somerset might be surprised at 3 Horseless Carriages arriving at the ground, and they may object to having the souls taken by the camera equipment. 🙂

260 mile round trip, not the worst journey of the season, that comes next week when GCFC play Merthyr Town.

The Guildford City V Wimborne match has been postponed. An inspection at 0900hrs this morning ruled that the pitch was too heavy & that because of fears for player safety the match couldn’t go ahead.

Looking out the window, the Sun is out (and has been for some time) and it is pleasant outdoors.

So yet another another game that will need to be played on a weekday evening, which is tough for players with work commitments, the only positive is that at least it is at home.

I am looking to attract sponsors & advertisers for the 2014/15 football season for the Guildford City Football Club. I am hoping that we can maintain existing arrangements with sponsors and attract new ones as well.

The final touches to the commercial brochure have been completed and it is now available to download here.

If you require further details or wish to arrange an appointment to discuss the opportunities available, please contact me on 075 88 66 9580 or email paul@pressphotos-uk.com

It was nice to have some great coverage in the Surrey Advertiser last weekend, hopefully we can continue to secure similar coverage from now until the end of the season, I guess that will depend on Guildford City winning more games than they currently have done. Hopefully the Guildford City v Godalming Town Derby last night will also gain some publicity.

I am slightly biased about Guildford City getting local newspaper coverage, as one of my missions this year is to secure additional sponsorship which can only be helped by some good publicity.

GCFC host Wimborne Town at the Guildford Spectrum on Saturday, assuming that the weather permits it, we were a little fortunate to get the match on on Wednesday night, thanks to the hard work of the GBC & volunteers we were able to play, however the weather forecast is not good, with Rain predicted all day on Friday. Just hope that it stays away

Wimborne (The Magpies) hosted Guildford City at Cuthbury earlier in the season, where they romped home with an 8-1 victory. Whilst they are some 12 places ahead of where City current reside, I can’t see them winning by the same margin. In fact I can see GCFC giving them a proper game, as long as we can keep 11 players on the pitch for 90 minutes! 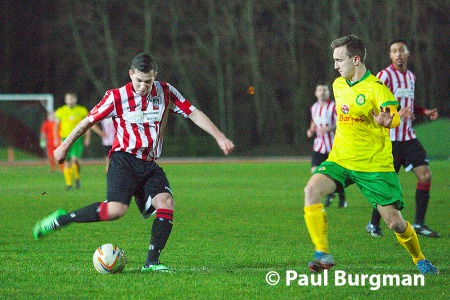 GCFC ended up with 9 men on the pitch at the final whistle, but because of the heroics of Keeper Antony Hall ended up with a 0-0 draw. City new boy Sam Spencer performed well, but limped off with a knock to the shin in the second half, which gave fans the chance to see new signing Andy White, up front.

For the first 20 minutes or so, until the sending off of Jamie Thoroughgood, Guildford City were all over the visitors, testing their goalkeeper on at least 3 occasions. After the red card (for a foul, being the last man, and allegedly a goal scoring chance some 30 yards out) the balance of the game changed, and Godalming were in the ascendancy testing the in-form City keeper Antony Hall. In the second half Antony Hall made his second penalty save of the season, and also pulled off several other outstanding saves. When the numbers were evened up, after a Godalming Town player was sent off, the balance changed again and City started to apply pressure at the other end.

Then not long before the end of the game, a second yellow card for an unnecessary tackle in the oppositions half of the pitch by the corner flag by Darren Stapleton saw him earn his second Yellow Card of the game. Having only just come back from a 2 match suspension, it looks like he will be suspended again.

Anyway a satisfactory draw, considering. If Guildford had been able to keep 11 players on the pitch I think that a fairly comfortable win would have been on the cards.

Anyway the next game that I am covering for GCFC is against Wimborne Town at the Guildford Spectrum. Wimborne are currently sitting in 10th place in the league with 34 points, whereas City are second bottom. However with the personnel changes since they last played, I can’t see Wimborne romping to a 7 goal margin again.

Ok so the Fleet Town v Guildford City FC match at the weekend was cancelled due to a waterlogged pitch, so will be rescheduled sometime soon. The next match is the Wey Valley Derby between Guildford City & local rivals Godalming Town on Wednesday.

Godalming Town currently have the bragging rights after GCFC lost 1-0 at Wey Court earlier in the season, but with the much changed line up, hopefully City will be able to reverse the result at the Spectrum.

Godalming Town is currently ground sharing with GCFC after their ground & club house were badly damaged by flooding over the holiday period.

This weekend sees one of the few local away games of the season, a ‘derby’ match against local rivals Fleet Town. Hopefully ‘The Sweeney’ will be up for the trip to Calthorpe Park at 1500hrs, to cheer on the City!

It should be an interesting match with both teams struggling at the bottom of the Calor League 1 South & West. It could be even spicier as the Fleet Town Striker is an ex-Guildford City FC player.

Another win for Guildford City will hopefully kick start the season, and enable them to build some sort of form for the new year. Having won last week 3-2 against Clevedon Town, whilst Fleet gained a draw against high flying Cirencester. Hopefully more of the same this week from GCFC.

Fortunately the rain held off just about long enough for the Pitch at the Spectrum to dry out enough to get the first home game played in nearly a month, after the postponement of the Wey Valley Derby against Godalming & a match against high flying, big spending Swindon Supermarines.

Guildford City were hosting Clevedon Town yesterday, and managed to record only their 4th win of the season. During the first half, City created numerous chances but ended up looking down the barrel of defeat.

But with the sharp youngster Sam Spencer scoring twice & contributing with an assist for the own goal City ran out 3-2 winners, “Come On You City”, “Kevin Rayner’s Red & White Army”