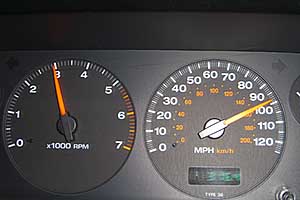 I hate Gatso cameras, that is well known to the majority of the readers of my blog, I have had several rants about them in the past. One of the reasons for being pissed off is that the government recently scrapped a study into the effectiveness of speed cameras, and as the research looked like revealing that speed cameras were not effective in reducing casualties and fatalities the government decided to bin the findings. Want to know more Shuffle over here, and sign the petition. One of the things that seriously pisses me off though is the rabid anti speed hobbyists.

Outside my house the other night a group of octogenarian anti-car rabid dogs were being taught by the Surrey Police to use speed detecting hair dryers. Now one of my biggest issues is that these people weren’t ordinary bods who want to reduce the deaths on the road, they are seriously car-hating loons. Whilst they were outside in the street, I heard repeatedly, “here comes another bloody one” referring to a car that was moving well within the speed limit towards them. To be honest 20 decrepit old farts and two police officers in Day-Glo jackets is enough to make sure that anyone doesn’t go speeding past. These aged old twats are, what as is know in the police trade as, Community Speed Watch Volunteers. The Police Officers that I know treat them mainly with contempt, but as it saves them standing in some piss-hole estate in the pissing rain, they tolerate them.

Anyway, by the time they had swung the 80 year old bint around with the hairdryer to point it in vaguely the right direction of the car, the car was no longer there. To be honest the way that the daft old prats where waving the speed detector around, if it had been a MAC-10 I would have lost the roof off the house and the church over the road would have been minus a steeple. Seeing as Speed Cameras actually have relatively little effect on deaths on the road, I expect this to change, with all of the Old Farts out there waving speed detectors around I expect the rate to increase, due to the doddery on bastards falling in front of traffic, having heart attacks because of the excitement of pointing hairdryers at cars, and belligerent bastards like me swerving to scare them to death. Seeing as I had nothing better to do today I thought I would investigate some of Surrey Police’s records on speeding motorists and the number of accidents they may have caused. It made pretty enlightening reading. From their own 2006 report, the 5 main contributory factors in most fatal or serious injury accidents were as follows:

You will notice that exceeding the speed limit was a contributory factor in 6% of fatal accidents and 5.4% in Serious Injury Accidents. So when nearly 30% of all accidents are caused by crap driving, 20 % no known cause and incompetent pedestrians crossing the road without looking adding another 10% why target the driver who may be a little over the speed limit. What I would like to know, and their figures do not include it is where exceeding the speed limit and another factor for example drink/drug related offences have combined, I suspect that the number of KSI (Killed, Seriously Injured) Speed related “Only” would drop further.