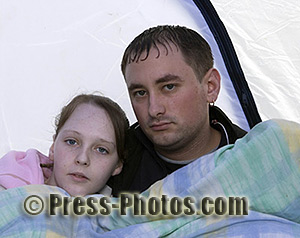 A nice little Human Interest story that came to light recently, but surprisingly, to me at least, not a sniff of interest from the Nationals.


Pregnant Natasha Nightingale has pitched her tent on the expensively manicured front lawn of Surrey Heath Borough Councils office in Camberley, Surrey. Natasha, aged 17 years and boyfriend Barry Alderton, 23, were forced to move out of their privately rented accommodation with only one weeks notice, as the landlord didn’t want to pay tax on income generated from rental, and wanted cash only tenants rather than those on housing benefits. Natasha, from the Old Dean in Camberley and her boyfriend moved out after having been given one week notice.

Now, homeless Natasha, who moved out of the family home a year ago, and Barry are now involuntarily homeless. They approached local conservative run Surrey Heath Borough Council to seek advice and re-housing.

Surrey Heath offered them Bed and Breakfast accommodation in Slough, which is a tricky journey to manage with no car and little money, it is a £17.00 return train journey, which when you are on un-employment benefit of £34 per week eats a sizeable chunk out of your income. The Bed and Breakfast also charges a £17 per week “Service Charge” which has be paid for out of the un-employment benefit, although the main costs are met by the council. Natasha said, “It’s not that we don’t want to go to the B&B, anything would be better than this tent, we can’t afford to go, I have an appointment with the Midwife on Monday, in Camberley, which will mean getting a train and spending another £17 on a return trip”.

Reluctant to move to an area that they don’t know, with no money and miles away from family and friends, Natasha and Barry have opted to pitch their tent. The council refuses to put them on the homeless list unless they go into the Bed and Breakfast accommodation. So it would appear to be a stalemate. Natasha said, “The locals have been terrific, we have been offered food and drinks, and many people have stopped by to wish us well”.