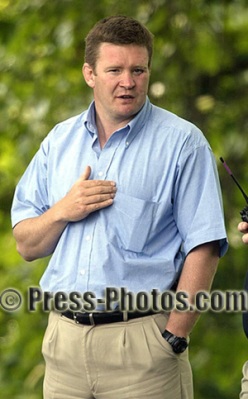 Trevor was with Princess Diana during the car crash that proved fatal for her and Dodi Fayed. I don’t subscribe to many conspiracy theories but there was something very fishy about that accident, and the alleged involvement of the paparazzi photographers that were in pursuit.

However Trevor was very seriously injured during that accident and it was a long time before he returned to any kind of security work. His first security job, we were tipped of about was running the personal protection of a pro-celebrity tennis tournament at the Hurlingham Country Club in Fulham. Very posh.

I was able to blag a press pass, to photograph the tennis, with the hope that he would be about and I would be able to get some pictures. However he proved very elusive and to fit with the reason for me to be there I spent the greater part of the afternoon photographing the tennis matches. The tennis was great fun to watch and i got a few nice pics as well, which is nice. Late in the afternoon I spotted our Trevor sneaking around, in the background and so I made use of a television tower (that wasn’t being used, actually it wasn’t used at all except by me) and with a Canon EOS1D and a 400mm f2.8 and a 2x extender fitted, I managed to discretely get a few frames of him.

I wired these into the picture desk and was unsurprised to be asked, to get some of him with tennis in the background (christ have these guys ever worked in the field). I explained that it would be impossible, but they insisted. So I downloaded all of my images from the 3 CF cards that I had used (I was glad later that I had shot as many images as I had, but I’ll come to that) and went in pursuit of the big man.

I wondered around for an hour or so, and took a couple of frames with a canon EOS1d and a 100-400USMLIS, but nothing really worked, I tried to move in a little closer. D’ OH, I was spotted and that meant that there was going to be a problem. A number of his employees and colleagues approached and attempted to physically tried to restrain me, at which point I reminded them that they aren’t in the Army now, and cannot legally touch anyone, with running the risk of prosecution for assault.

The PR people were called, and explained to me that I should be photographing the Tennis and not the security arrangements, I explained that “I had spotted Trevor and though it might make a good story, but now I have been told I will not take any more.” Not good enough, Trevor and steroid overdosing no-necks wanted the films from my cameras. “Aint happening I replied, these are digital, but look let me delete the images from the cards and show you as I am doing it, because I don’t want to format the card and lose all my afternoons work”.

Well it took a while opening each picture individually, then closing them, then on to the next pic, after about ten minutes they were fed up and so I didn’t touch the pics I had shot earlier, I explained “this could take a while, but honest I haven’t shot anything earlier than when you spotted me.”

However, the story doesn’t end there. the Muscle bound nonce’s wanted to check my lap-top,so I said “Yes. No problems. Get a police officer here with a court order and I will comply” at which point they started to “try” and throw their weight around, and as anyone who knows me I am not a big guy (OK I am 6 foot and 12 1/2 stone) but I will argue the ‘toss’ over anything, however the battle had already been won, I had wired the important pics, but out of badness I stood and argued, until a police officer arrived, and confirmed they had NO RIGHT to do anything except ask for me to leave. Which I did.