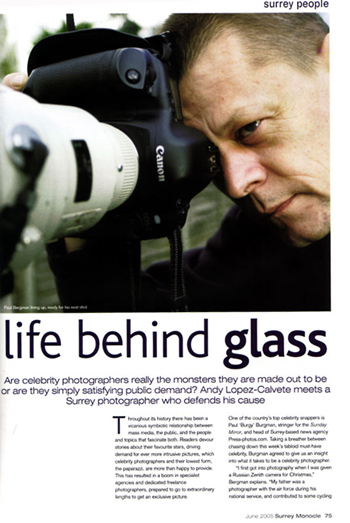 The Interview was done by Andrew Lopez Calvete (Calvers on the F8andbethere.com
forum). 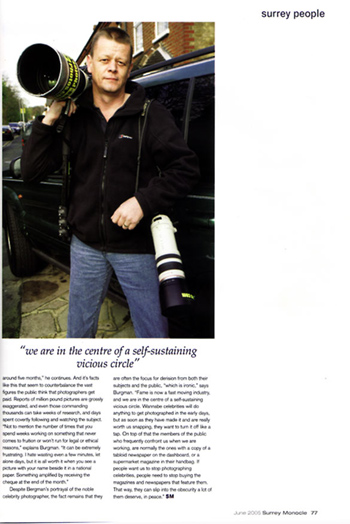 Life Behind Glass
Are the celebrity photographers really the monsters they are made out to be or are they simply satisfying public demand? Andy Lopez-Calvete meets a Surrey Photographer who defends his cause.

Throughout it’s history there has been a vicarious symbiotic relationship between mass media, the public and the people and topics that fascinate both. Readers devour stories about their favourite stars, driving demand for ever more intrusive pictures which celebrity photographers and their lowest form, the paparazzi are more than happy to provide. This has resulted in a boom of specialist agencies and dedicated freelance photographers prepared to go to extraordinary lengths to get an exclusive picture.

One of the countries top celebrity snappers is A Tog, stringer for the Sunday Mirror and head of Surrey based news agency Press-Photos.com.  Taking a breather between chasing down this weeks tabloid must have celebrity, he agreed to give us an insight into what it takes to be a celebrity photographer. 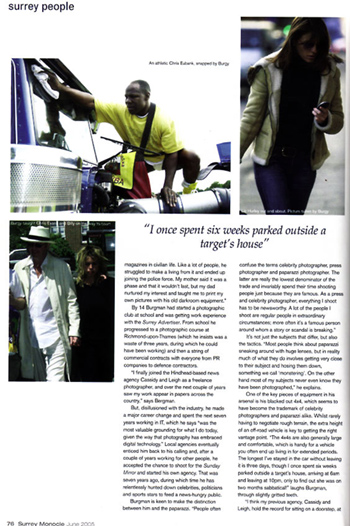 “I first got into photography when I was given a Russian Zenith camera for christmas” he explains. “My father was a photographer with the Air Force during his national service, and contributed to some cycling magazines in civilian life. Life a lot of people he struggled to make a living from it and ended up joining the police force. My mother said that it was a phase and that it wouldn’t last, but my dad nurtured my interest and taught me to  print with his old darkroom equipment”

By 14 he had started a photographic club at school and was getting work experience with the Surrey Advertiser. From school he progressed to a photographic course at Richmond-upon-Thames College (which he insists was a waste of three years, during which he could have been working) and then a string of commercial contracts with everyone from PR companies to defence contractors.

Finally I joined the Hindhead based news agency Cassidy and Leigh as a freelance photographer and over the next couple of years saw my work appear in papers across the country”.

But disillusioned with the industry he made a major career change and spent the next 7 years working in I.T., which he says was the most valuable grounding for what I do today, given the way that photography has embraced digital technology”  Local Agencies eventually enticed him back to his calling and after a couple of years of working for other people, he accepted the chance to shoot for the Sunday Mirror and started his own agency. That was  seven years ago, during which time he has relentlessly hunted down celebrities, politicians and sports stars to feed a news hungry public.

He is keen to make the distinction between him and the paparazzi. “People often confuse the terms celebrity photographer, press photographer and paparazzi photographer. The latter are the lowest common denominator of the trade and invariably spend their time shooting people just because they are famous. As a press and celebrity photographer, everything that I shoot needs to be newsworthy. A lot of the people I shoot are regular people in extraordinary circumstances; more often it is a famous person around whom a story or scandal is breaking.

It s not just the subjects that differ, but also the tactics. “Most people think paparazzi sneaking around with huge lenses, but in reality much of what they do involves getting very close to their subject and hosing them down, something we call ‘monstering’. On the other hand most of my subjects never even know they have been photographed”.

One of they key pieces of equipment in his arsenal is his blacked out 4×4 which seems to have become the trademark of the celebrity and paparazzi alike. Whilst theyÂ  rarely have to negotiate rough terrain, the extra height advantage of an off road vehicle is key to getting the right vantage point. “the 4×4 are also generally large and comfortable, which is handy for a vehicle you often end up living in for extended periods.

The longest I have stayed in a car without leaving was three days, though I once spent six weeks parked outside a targets house arriving at 6am and leaving at 10pm, only to find out that she was on a two months sabbatical!” he laughs, through slightly gritted teeth.

I think my previous agency, Cassidy and Leigh hold the record for sitting on a doorstep, at around 5 months” he continues. And it’s the facts like this that seem to counterbalance the vast figures that the public think that photographers get paid.

Reports of million pound pictures are grossly exaggerated and even those commanding thousands can take weeks of research, days spent covertly following and watching the subject. “Not to mention the number of times that you spend weeks working on something that never comes to fruition or won’t run for legal or ethical reasons,” he explains. “It can be extremely frustrating. I hate wasting even a few minutes, let alone days, but it is all worth it when you see a picture with your name beside it in a national paper, something amplified by receiving a cheque at the end of the month.”

Despite his portrayal of the noble celebrity photographer, the fact remains that they are often the focus for derision from both their subjects and the public, “which is ironic” he says. “Fame is now a fast moving industry, and we are in the centre of a self sustaining vicious circle. Wannabe celebrities will do anything to get photographed in the early days, but as soon as they have made it and are really worth snapping they want to turn it off, like a tap. On top of that members of the public who frequently confront us when we are working, are normally the ones with the copy of a tabloid newspaper on the dashboard, or a supermarket magazine in their handbag. If people want us to stop photographing celebrities, people need to stop buying the magazines and newspapers that feature them. That way, they can slip into the obscurity  a lot of them deserve, in peace”