It is strange to think how much the equipment involved in my job has changed over the last 20 years or so, I was chatting with a colleague recently about how much money had been spent on equipment. The figures are frightening; it would have paid for my house several times over. That’s not including the Zenit, Cosina and Pentax kit I started out with (which would have added about another tuppency ha’penny to the bill). 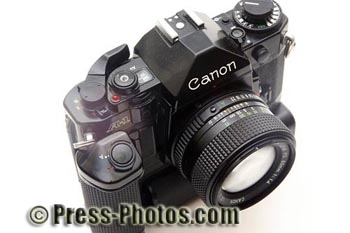 When I first started press photography in the early 1980s the kit of choice was Canon A1 bodies; equipped with MA motordrives, Speedlites or Metz flashguns: I had a Metz 402 (bloody ugly great monstrosity) which despite the fact it was second hand when I acquired it,worked fantastically well, certainly a lot more powerful than the Canon Speedlite 199A and quicker to recharge.
Although being a bit of a label snob I always wanted the Canon 480G, yet commonsense prevailed, when I did replace the 402 it was with a Metz 60 CT, which is still in use today: although not very often.

The kit remain unchanged for a number of years with only minor changes (in those days I used to wear kit out and have to replace it, unlike today were the kit old hat before it is even out of its box. (I haven’t even thought about the scanning equipment that we have used over the years (including hulking great big Hasselblad Scanners) or the dev kits that we used to drive around with in the boot of the car.

The only significant change for the best part of 5 years was to add T90 bodies when they were launched. However in 1990 camera the first shock to the system, and the first wholesale change of working practices with the launch of the EOS autofocus camera bodies.

So early in 1990 all the original Canon FD kit was retired (I actually still have a few of my original camera bodies, however their resale value is negligable now as the film market has all but died and the condition that many of them are in aekms them pretty undesirable to the regular amateur photographer who prefers their equipment to be shiny (well mine are but mainly a shiny brass colour). All the old FD lenses and bodies went (the only things that remained
were the Metz 60 and the Billingham. 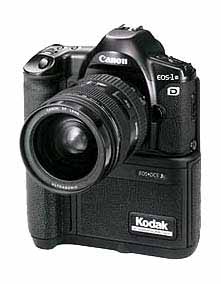 The biggest change (and shock to my system) came in the mid to late 1990s when the Canon teamed up with Kodak and produced “the Brick” or the DCS3 as it was unofficially known.

The camera was ground breaking and it meant a whole load of new skills were going to required as a press photographer, not least learning how the imaging chip worked under difficult conditions. It turned out that the imaging chip didn’t work so well under poor conditions, so film was not going to go out of fashion, just yet. At the time I am sure we didn’t worry about the lack of a preview screen (as no other cameras had them), it was a simple task to remove the PCMCIA card and stick it in the laptop. The cards were a nightmare, we used Viper 170mb cards (a double height card, which was just a portable hard disk, and very fragile). The camera body was based upon the EOS1N with a whole host of additional bits engineered by Kodak.

The imaging chip was quite a bit smaller than the original 35mm frame, so instead of masking the viewfinder down to the appropriate size, they simply marked the focusing screen with a black box which defined the limit of the imaging chip, however I still maintain that it wasn’t very accurate. And only having 1.3 megapixels meant that you needed every single pixel to count. There were numerous problems with the camera, the metering with flash was hopeless, and it took a lot of work to get the thing to work well.

Eventually the Viper cards died (thank god for that!) and Lexar PCMCIA cards were used to replace them, they were a bit more reliable, but when they died, that was it, with the Vipers you usually got some warning, and could stop shooting and download.

1998 was a very good year; probably the first truly useable digital SLR was launched in the guise of the Canon D2000 or Kodak DCS520. Still based on the EOS1N the difference was huge, most importantly was the 2 megapixels imaging chip, swappable rechargeable batteries (the DCS3 had to be plugged into a wall socket to charge) a preview screen and at last a meter that worked reasonably well, especially with the 540EZ flashgun, also having the preview screen meant that you could instantly check to see if you had fried the subject with the flash, one of the biggest differences was that you could now do test pictures for car shots.

The DCS520/D2000 is still a great bit of equipment, although there are many newer cameras, probably very few be so influential in the Press Pack as the DCS520. The biggest compliment about the 520 was that it worked, everything worked and it was reliable, the images were great, no problems with skin-tones (unlike the later Canon EOS1D).

I only ever shot TIFFs, which were a proprietary version of the TIFF format, and the 520 gave a 5.7mb image when opened in Photoshop. Although from memory you were able to convert from TIFF to Jpeg on the fly (actually it took ages to convert the images in camera. The Kodak Acquire software was intuitive, easy to use and provided all the functionality that could have been needed, indeed the current Canon Acquire software seems to owe a lot to the original Kodak.

Canon/Kodak really hit the mark with the DCS520, even the EOS1D mk II is very similar in layout to the 520 especially the functions built around the rear display screen.

My pair of DCS520s never got to retire gracefully, when I replaced them with EOS1D I sold them to a snapper in the west country, where I believe they are probably still plying their trade.

The EOS1D arrived in the UK in December 2001 (at least the market was told they were shipping) and I had one of the first in the country, and whilst there were a few teething troubles (hell, like there weren’t with every other digital camera I have ever used!) some of which needed firmware upgrades, which was relatively painless, the others required a visit to CPS at Elstree. However the guys at Canon Professional Services were up to their usual standards and turned the camera bodies around whilst I waited. So some three years after a near Â£12,000 investment my EOS1D bodies have finally been allowed to retire, well not retire so much, as be relegated to 3rd and 4th back up. Occassionally thrown into places and locations that I would rather not put the EOS1 D MkII N bodies. Remote controlled behind a football goal, or hanging out of the back of a car. Just as the EOS1D was a revalation, so too have the mkII N’s been. 8.2 megapixels huge RAW files giving near 50mb in 24bit image file sizes. Greatly reduced noise levels at high ISO’s and incredible performance just about everywhere else.